In accordance with our purpose to form a new Lodge, Brother William W. Allen of St Johns Lodge No. 1, demitted November 29, 1883, and Bothers William R. Kenan, James C. Munds and William A. Williams demitted from St. Johns Lodge No. 1, December 27, 1883, and associated with them was Brother John C. Chase, formerly of Bethany Lodge of Merrimac, Massachusetts, and from Wilmington Lodge No. 319 came Brothers William L. DeRosset, Henry G. Smallbones, Walter Smallbones, William H. Chadbourn, George Chadbourn, John D. Taylor, and Samuel Northrop, who all demitted from their Lodge in December 1883.

This was our beginning. Our ending yet lies unfolded in the womb of time and our work for good we pray is not finished. One hundred and twenty seven years is but a short space of time with Masonry, and we make these records while they are fresh in the memory of the living.

The movement for the formation of Orient Lodge was begun in the summer of 1883 and continued through the fall. At a meeting held on the evening of November 21, 1883 it was agreed that we would demit from our respective Lodges and apply to Wilmington Lodge No. 319 for a recommendation to the Most Worshipful Grand Master to grant us a Dispensation to form a new Lodge to be called “Orient”. This petition was promptly acted upon at the regular communication of Wilmington Lodge in January 1884, approved, and the petition was sent to Grand Master Robert Bingham.

We claim our descent from St. John’s Lodge No. 1 of the jurisdiction of North Carolina, whose history is replete with much ancient and forgotten lore, (being a legitimate offspring of the Grand Lodge of England) through Wilmington Lodge No. 319. We have a pride in our lineage, and feeling that the past history of our parent lodges is ours by birthright, we cherish their ancient traditions and have a lively interest in their success.

As we wear the badge of our order, we can sing with the Poet Laureate of the Craft:

Wi’ ribbon, lace and tape on,

Let Kings and princes wear them a’

Gie me the Master’s apron!”

The first meeting of Orient Lodge was held on the evening of February 6, 1884, by and under the authority of a Dispensation from the Most Worshipful Grand Master Robert Bingham, as follows:

The Grand Lodge of North Carolina.

By the Most Worshipful Grand Master.

To All and Every Our Right Worshipful and Loving Brethern,

Know He, That the Most Worshipful Robert Bingham, Grand Master, at the humble petition of our Right Worshipful and beloved brethren William R. Kenan, William L. DeRosset, William W. Allen, Henry G. Smallbones, James C. Munds, William A. Williams, Walter Smallbones, John D. Taylor, John C. Chase, William H. Chadbourn, Samuel Northrop, George Chadbourn, of the Ancient and Honorable fraternity of York masons and for certain other reasons moving our Most Worshipful Grand Master, doth hereby constitute the said Brethren into a Regular of Free and Accepted masons, to be opened in Wilmington in the County of New Hanover, by the name of ORIENT. At their said request, and from the great trust and confidence reposed in every of the said Brethren, the Most Worshipful Grand Master doth herby appoint:

For opening said Lodge, and governing the same until the first Annual Communication of the Grand Lodge after the date of this Dispensation.

It is required of our friend and Brother William R. Kenan to take special care that all and every of the said Brethren of said Lodge, as well as those hereafter to be admitted into our body by said Lodge, be regularly made Masons; and that they do and observe and keep all the Rules and Orders contained in the Book of Constitutions, and that the Ancient Landmarks be strictly attended to; and further, that he do cause to be entered, in a book kept for that purpose, an account of the Proceedings of the Lodge, which, when done, is to be transmitted to the Grand Master with a list of those Initiated, Passed and Raised and otherwise disposed of, under his authority.

The remaining officers, who were appointed by the Master, were as follows:

At this Communication By-Laws were adopted, committees appointed and an application for the degrees was received, and on April 16th the Master’s degree was conferred.

Brother W. W. Allen having removed from the city and having applied for a demit, the same was granted.

During the year there were held 18 communications. One was Entered, Passed and Raised and one Demitted.

Our Charter was received from the Grand Lodge bearing date of January 14, 1885.

Deputy Grand Master Charles H. Robinson, at the regular communication of the Lodge, held April, 15 1885, instituted the Lodge and after an election of officers installed them as follows:

Brother William R. Kenan, our first Master , was born in Kenansville, Duplin County, North Carolina, August 4, 1845, being one of the Charter Members demitted from St. Johns Lodge. He died in Baltimore, Maryland, April, 14, 1903. He was noted for his kindly and cheerful disposition and was a gallant soldier, and Captain of the Wilmington Light Infantry in later years.

Eight Communications were held during the year. The membership was twelve. 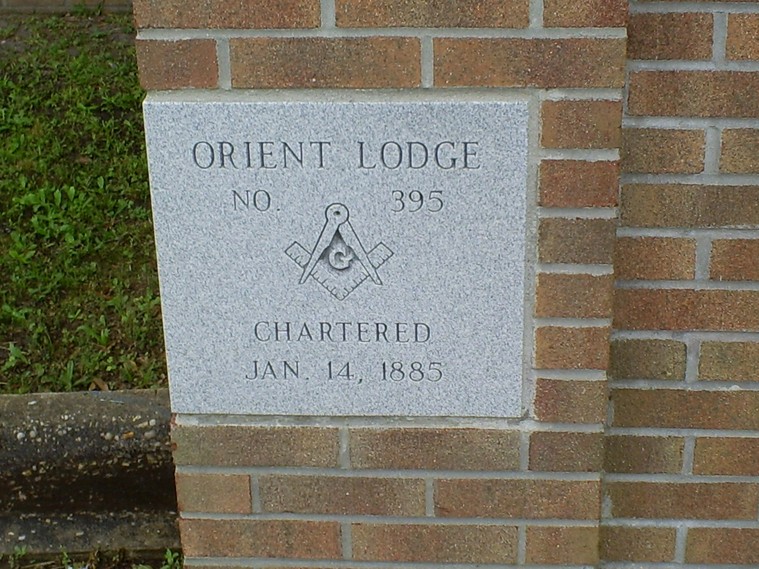 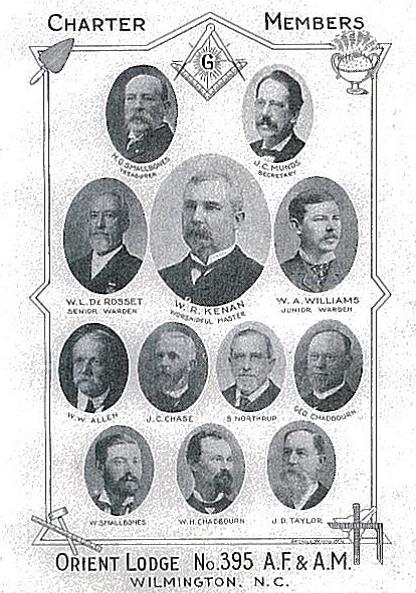 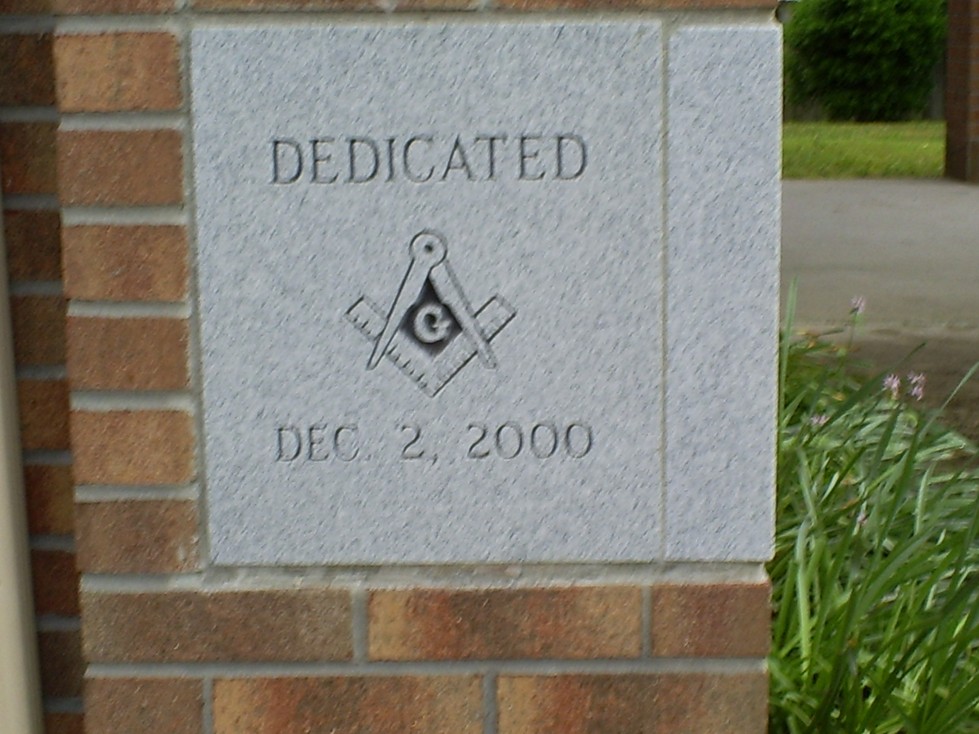 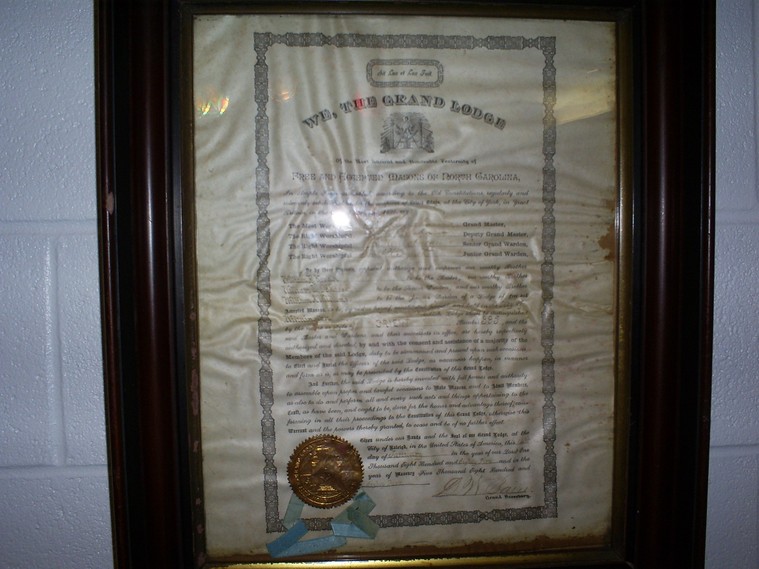